Okay, so I have started on some of the crafts that I have mentioned before that I wanted to start working on. I will not share what they are here yet because some may be part of some secret Santa or white elephant gifts in the near future. Let's leave it for a surprise....

I will share the little logo I came up with to go with the items I create. Who knows, maybe something could come of it someday.... Anyway, so here is the logo: 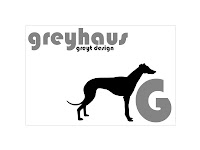 So, I think it came out pretty nice. Color could be used in place of the gray sometimes, which could be neat. Maybe I do red and green for Christmas or something.

As for the name, this actually holds a good bit of meaning. First, Bauhaus. I will utilize Wikipedia to get a concise definition for those of you unfamiliar with it. So Wikipedia says, "Bauhaus ("House of Building" or "Building School") is the common term for Staatliches Bauhaus, a school in Germany that combined crafts and the fine arts, and was famous for the approach to design that it publicized and taught. It operated from 1919 to 1933.
The Bauhaus school was founded by Walter Gropius in Weimar. In spite of its name, and the fact that its founder was an architect, the Bauhaus did not have an architecture department during the first years of its existence. The Bauhaus style became one of the most influential currents in Modernist Architecture and modern design. The Bauhaus had a profound influence upon subsequent developments in art, architecture, graphic design, interior design, industrial design, and typography." I have had an interest in and appreciation for this particular realm of design for a while and appreciate the works of many that arose from the school and related movements. This is not a blog about design, so I will NOT go into detail about the movement, who and what I like, etc.

So, in case you also are not aware, T (my husband) and I both work in the field of architecture and I have a degree in Art History as well. Design culture runs deep in my house. I designed our house. When we moved in, T decided it had to have a name. I am not sure how long it took to come up with it (months I think), but we wanted it to reflect us. We eventually came up with Greyhaus, which tied together greyhounds, architecture and a little play on words.

When I came up with the idea to include a little card with my crafts, after a little discussion with T, I decided to carry the Greyhaus name over to this endeavour as well. It seemed appropriate. Greyhounds and creation, craft, design. I think it's cool....

Posted by Brittaney at 7:55 PM