Just wanted to wish everyone out there a Happy Halloween and share my greyhound pumpkin!
Yes - I carved it. I found a picture online, printed it, use a spiked-wheel tool to punch the pattern onto the pumpkin, traced the dots, and cut and carved my way to a greyhound head. Enjoy!

Posted by Brittaney at 12:38 PM No comments:

Dax has hurt himself, again....

Last night, we come in from handing out candy and take the dogs out back. They ran around a little bit, but nothing too crazy. We come back in and all 5 of us head into the office. We hang out in there for 30-45 minutes. Dax gets up to leave the room and he is limping on his back right leg, holding it up. That is his broken hock leg. I figured he just maybe twisted it playing. So, I get him to lay back down in the office and he is licking his foot pretty good. When he finally lets me see, I notice it's bleeding and it looks like it is between his toes. So, I pull his toes apart a little and he has totally split the webbing between the two middle toes! This is the second foot he has done this on! 6-8 months ago he did this on his front left foot between the inside and next toe. And he split is all the way too! Nothing left between the toes! We have no tree in our yard, or any of the neighbors for that matter, so there are no sticks or anything that he could be stepping on. Neither of the other two have had any foot problems in our yard. I just don't know what to make of it and it just seems too ironic that he has done this twice!

So, I put some neosporin on some gauze, put it between his toes, vet wrapped his foot, then put a sock over it and vet wrapped that to his leg. He slept muzzled because he would not leave it alone. This morning, I put neosporin between his toes and re-wrapped the foot. No sock this time. Poor baby....
Posted by Brittaney at 8:27 AM 1 comment:

Berry has been taking his Medicam since the vet visit yesterday, and I am happy to say that he is back to normal. He is eating, not that he stopped, playing, rooing, jumping up and so on. We are still making him go out alone to limit his running, but he seems to be back to himself. The Medicam is for 10 days, so let's hope that he is still feeling good AFTER he is done with the meds.
Posted by Brittaney at 7:46 PM No comments:

So, yesterday afternoon, we let Berry White spend some time by himself playing in the yard with the soccer ball. He LOVES this. He does not do it often, but he seemed interested, so we let him go. That was about 5:30 p.m. We went out to dinner with friends and then came hound a little before 10 p.m. When we got home, Berry did not seem himself. He had his head hung low and let out a GSOD (greyhound scream of death) when bumped. We let them out, brought them back in and watched tv for a bit then headed for bed. Berry could not get settled and when he would lay down, if he shifted around, he would let out a GSOD again. He woke us up throughtout the night. He just could not settle and he was in pain.

Fearing the worst, I called the vet to see if we could get in this morning. We did, but not with our normal vet, which was okay. We brought him in and the vet was able to find two things that bothered Berry: turning his head towards the right a bunch and a spot on his humerous where the tendon meets the bone. Xrays were called for. So, we went back to the room, while they x-rayed Berry. Luckily our vet uses the newest digital xrays, so he did not have to be sedated.

The vet entered the room without Berry and closed the door - my heart sank, but the news was not as bad as it could have been. The point on the humerous where Berry reacted seemed fine on the x-ray. His leg bones actually looked very good. No arthritus or anything. When x-raying the leg and shoulder, he noticed a spot on his spine. He then did an x-ray of that. He said Berry has one fusion and another poor looking vertibrae. He thinks the pain today was from the tendon though, but said we should watch for any neuroloical changes, as the spine issue seems to be nothing now, but could be bigger later. So, we were sent home with Medicam and instructions to limit his activity for the next week or so. So, something is wrong, but it's not the BIG C as I feared it might be. I had already shed some tears, thankfully, it was for naught.

He is resting now and has had his meds. I think they are finally starting to work and he is relaxing. He just seems unsettled and is still keeping his head low, well he was last time he was up. I know he hurts. Hopefully the meds will help. If not, we see the vet again....
Posted by Brittaney at 11:09 AM 1 comment:

Last Friday night, Gus went to his new home in Mississippi. Last I heard, he was doing very well. His new Mom and Dad loved him from the get-go and he will surely be spoiled.

I must admit, I do not miss him as much as I thought I might. As I have said before, he may not have caused any trouble and my hounds did not mind him, but he was not right for our pack. He is a greyt boy, but never to be my greyt boy. When they left with Gus, my 3 immediately went to sleep. It was like a weight was lifted from them. The last few nights, it is not a mad dash to get in the bed and everyone doesn't have to sleep with us. It's just no big deal. That goes back to me saying he did not really "fit" here. My hounds are not "needy". They all like attention, but none of them are velcro dogs. Gus is. He wanted to constantly be in contact with SOME human. Mine normally do not, but became jealous because he got all this attention. This bothered them and I ended up with a house full of velcro dogs! No one ever got snippy or anything, there was just always a hound there. I am by no means suggesting my hounds are not spoiled rotten and the center of attention in my house, but it's just different. Some of you will understand what I mean.

Either way, Gus is in a happy home. My home is settled again. Life is greyt!
Posted by Brittaney at 7:21 PM No comments:

Gus is being adopted! He goes to his new home in Jackson, MS on Friday! We love him and will miss him, but I am so happy to see him go to his forever home and know that we played a role in that. It is greyt news! I'll post more about it after we meet his new family.
Posted by Brittaney at 3:14 PM No comments:

So, lately I have been looking around greytalk and the web and checking out all the greyt greyhound related crafts that people are doing. I am an artsy person, so I think I need to do something too. I'm going to have to try out some of the things I have seen lately. I'm not sure where to start or where any of this will lead, but it's been a while since I've done anything artsy other than some photography. I have a few non-greyhound things I need to do. I think I might get the pups to paint something. I've got a pretty good idea about how to do it now. I think it would be neat. I'd also like to make some Christmas stockings for the greys. I saw some on greytalk that someone did and I think I could do something similar. I already can make coats. All mine have coats already. I need to make some new beds. I'm pretty much just rambling now. :o) I'll figure something out.
Posted by Brittaney at 12:52 PM No comments:

I really don't have anything in particular to write about, other than wishing that I could commit to writing something regularly, even if it was about nothing.... We still have Gus. On the 20th, he weighed in at 72 pounds! We just finished a round of de-wormer today. Nothing major. He is doing well. He is very stubborn sometimes. Loves attention of all kinds and follows whoever comes to the house and leans on them. He is very sweet. Tomorrow we will have had him 6 weeks. He is a greyt dog. This is where the questions really start to come in about, "Why don't you keep him?" "How can you let him go, he is so great!?" And so on. We get this with every foster. Seems to be more with Gus since we have had him so long. He is a fine greyhound. He does well with our hounds and they don't mind him. I love him to pieces and treat him like my own, but he isn't. I don't feel compelled to keep him, I mean there are times, but generally, I don't feel like it's right. It's one of those, I wouldn't mind if he stayed, but it's cool if he goes too. We have had a foster that we were so glad it left. Others, we have liked a lot, but didn't go well with our hounds... the situation is different with every hound. Gus is special. He has his sad story, but that does not compell me to feel any different with him as it does/might some people. In the end, he is just like any other greyhound. He really is. He is just your average goofy boy greyhound. At this point, he looks like a hound that just left the track not long ago. You would never know what he has been through. You know when the hound is right. Most people don't really get to "pick 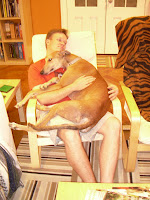 " so to speak as we have. We adopted Berry White and Anna in "love-at-first-sight" moments and Dax was only from a picture and a description. I knew when I saw him that he was different and would take work. He was so shy, and still retains some of that. BUT he is my boy. My boy. Gus is not my boy. And I know that every dog you have isn't. I will let him go. I will let others go. Maybe 3 is our comfort level. I don't know. Four for this long has not been hard. I think the reason we have no fallen head-over-heals for Gus is because he is too needy. Clyde was KINDA like this, but not as much. As T (my husband) said the other night, Gus needs more love than we can give him. He needs to be with another dog, but maybe just 1, so he can get more attention. Something. Gus is a greyt hound, but he is not our greyt hound.
Posted by Brittaney at 5:27 PM 1 comment: